Everything you need to know about Puyo Puyo eSports

These last few years have seen a revolution in terms of how people consume games. Gaming went through a transformation from a pastime people usually consume on their own, to an arena-filling competitive event. Should it come as a surprise, then, that even the most niche of gaming products are coming to light as possible esports? If you want a bet in esports, you need to know best esports betting sites.

One such game is Sega’s Puyo Puyo. The original game was released in 1991 and has become a well-known franchise of puzzle games in Japan. The various games featured all sorts of gameplay variations, but the one that gained the most traction was 2014’s Puyo Puyo Tetris. This game took the basic premise of good old Tetris but adapted it be somewhat more engaging. It heavily features elements of both games with various game modes of its own.

Either way, the competitive aspect of the game quickly surfaced as the fans’ favourite feature. As such, two later titles, 1994’s Puyo Puyo Tsu and the 2003 Puyo Puyo Fever. All of this leads us to the most recent edition to the series, Puyo Puyo eSports, published internationally as Puyo Puyo Champions.

Puyo Puyo eSports: What’s it about?

As the Japanese name might imply, this entry into the series is entirely focused on competitive multiplayer.

For one, it completely lacks any sort of singleplayer campaign, which was considered one of the main draws of the series. Instead, it provides players with several puzzle games featuring the series’ characteristic blobs. Also, do note: there is no actual Tetris in this one, blobs or not. 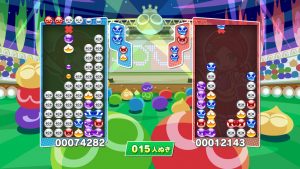 So, what makes this one more suited to competitive multiplayer then earlier iterations? Firstly, there are some subtle tweaks to the rules and core mechanics of each game mode. All of them were made to minimize the influence of luck, focusing more on individual player skill. Besides that, there are new options for puyo puyo online in-game tournaments, making organized competitive play puyo puyo easier than ever.

So, how did this decision to suddenly move toward eSports come to this seemingly casual little puzzle tetris game?

Whether it was watching the current trends in gaming that drove this decision, or if it was a more natural direction for the series’ development – we can’t say for sure. But the release of the eSports version was made with cooperation with the Japan eSports Union, an organization dedicated to supporting and popularizing esports. 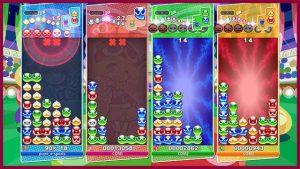 The Union helped Sega by issuing professional licences and helping them organize the first World Puyo Puyo Championships back in 2018. This was the first large-scale competition in Puyo Puyo, complete with a 1,000,000 yen prize for the winner, and has since become an annual event.

Various smaller leagues also popped up around the world modelling themselves after the Japanese, the most famous of which is Britain’s Puyo GB league.

People are asking these questions
🎮 What puyo in english means?

Puyo comes from Japanese word yon and it means four, signifiyng the fourth game in the series.

🎮 What is puyo pop fever game?

Its game developed by Sonic teams and its 5th main installment in the Puyo puyo puzzle game series. This game mechanics are mainly similar to other puyo puyo games.

You can play in Sega official page, but if you are new to the game be prepared to lose.