Three NFL Quarterback That Can Make You Money This Season 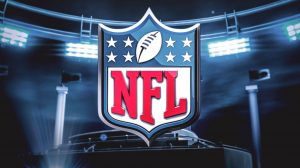 The quarterback position is the most important in American football, it requires a very special and very talented player to play there. When it comes to betting on quarterbacks, you can do this in many different ways. The most common are to back them to throw a high number of yards, while you can also back them to throw touchdowns during a game.

There are a number of top-quality running backs in the league (read this – three running backs to follow this NFL season), but those are very well known and the passing and touchdown lines that are set for these players are often very high, so they need to have a great game to go over them. If you are looking for players to back then you are better looking for slightly lesser-known players who can excel on a regular basis. The lines that are set are usually fair, so you have to find players who will go better than the bookie’s expectations of them, which makes betting in this way difficult, even though the lines are only two-way lines.

If you are looking for guidance ahead of the new season then here are three NFL quarterbacks that you can back this season, ones that will hopefully have very good season’s and make you some money. 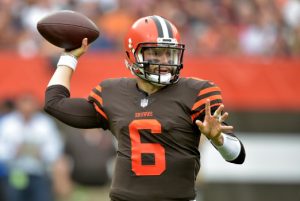 There isn’t a young quarterback in the league that is in a better position than Mayfield right now. He was drafted by the Cleveland Browns before last season and immediately installed as their starting quarterback. When drafted, the Browns were not in the best position, but since then things have changed dramatically.

Add Odell Beckham Jr and Jarvis Landry to their offence and this is a franchise on the up. Landry is a very good player, one that quarterbacks love because he makes it easy to make a few yards with his runs under the slot. Then add Beckham, one of the best players in the entire NFL, and Mayfield has two fantastic players to throw the ball to.

With Nick Chubb in the team offering a genuine running option, defensive players against the Browns will not be able to go all-in on the throw, they will have to also guard against Chubb running with the ball. This should allow a little bit of room behind the defensive line for the likes of Landry and Beckham to make key runs and combine with Mayfield to march up the field.

With Rashard Higgins and tight-end David Njoku to back up the main two, Mayfield won’t be short of people to throw to in 2019. Whether you are going to back him to throw touchdowns or back him on the total yards line, Mayfield has an elite group of receivers around him, and this all points to him having a fantastic season (read this – three wide receivers to follow early in the NFL season). The Browns are aiming for the playoffs and don’t be surprised to see them get there, this is an up and coming team that should be around the top half of the NFL for the next few years with Mayfield leading the way. 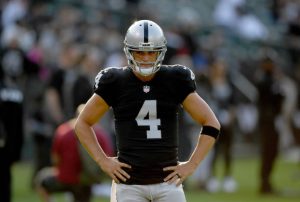 The Raiders were terrible last season, and I don’t expect them to be much better this season. With a poor defensive record and the lack of a big name, things did not go right last season at all. Fast forward to this summer and the Raiders have added four receivers who can all catch the ball, led by Antonio Brown who was a star in Pittsburgh.

This is a strange move for Brown, but one that should make Carr excel this season. They won’t have enough to lead the Raiders to the playoffs, but the fact that the Raiders were so poor last season should mean that the betting lines on Carr’s performance this season should be relatively low.

This will give him the chance to play well and beat the line on numerous occasions. Alongside Brown, he can also throw to fellow newcomers Tyrell Williams, JJ Nelson and Dwayne Harris. Those three can all play small parts in the re-birth of the Raiders this season. They won’t make huge moves and make a splash, but they can all do their own little bit, with Brown doing a lot, to give Derek Carr a good season and help him best the betting line plenty of times.

With their performances last season and the outlook for this season, the Raiders have slipped under the radar. I don’t believe they are anywhere near good enough to make a splash, but betting on Derek Carr to succeed could work due to the expected low lines we will be seeing on him. 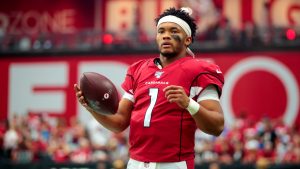 New to the league, Murray will certainly have his struggles this season when he pulls on the Cardinals jersey. The number one pick from last season has landed in a very good spot though, and that should be enough to earn him success this coming season.

With plenty of targets to aim for and a very good running game that includes his own ability to run the football, there is a lot for an opposing defence to take in when they are facing Murray. He will run the ball himself, handoff to David Johnson who is a star, and all of that should leave someone open without coverage down the field, that is what the Cardinals are hoping for anyway.

Youngster Christian Kirk is a great option as are veterans Michael Crabtree and the evergreen Larry Fitzgerald. With all of those options ahead of him, when Murray does throw the ball, there will be players queueing up to catch it for him.

He is in a similar position to Derek Carr above this season. I don’t think he will have a great season, neither do I think the Cardinals will. However, expectations are rock bottom for Murray in terms of throwing through the air, and this will result in very low betting lines being created, lines which I fancy him to do better than over the course of the season.