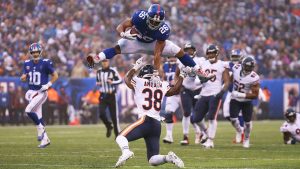 The new NFL season is just around the corner, and people who watch and bet on the sport are putting together their picks. With the number of betting opportunities now available when it comes to player betting, it is wise to have a few players up your sleeve that you can bet on and hopefully bring in a profit. Running backs in the right position can be a source of profit as they get a lot of carries and can pile on the yards if they are fed, and of course, touchdowns are also in the mix. If you are looking for some running backs to follow this season then here are our top three to look out for. 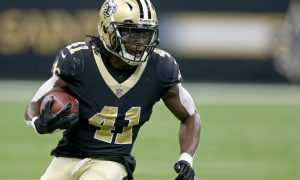 Kamara saints was steller last season, he was a top tier running back and looks sure to be the same again. However, there is one key factor that could elevate him even further. Mark Ingram, the other back in New Orleans, has left over the summer and someone is going to have to pick up his carries. Kamara won’t get them all, but he is certainly going to have a few more touches of the football than he did last season.

We all saw just how good he was then, with 14 touchdowns and 883 yards on the ground combined with a further four touchdowns and 700 yards in the air. To replicate those stats would be another great return for Kamara, and he will no doubt land you a few winning bets, but the chance that he has more opportunities to build on them is something that really makes him stand out.

His ability to attack on the ground and in the air makes him a difficult proposition when it comes to backing him to carry for a certain amount of yards, as most bookmakers split these into rushing and receiving yards. However, he had 18 touchdowns last season, and is always involved in the goal line action, with Ingram gone, don’t be surprised to see this superstar hit 20 this season, and there has to be some scope in backing him to either score a touchdown at any time or to be the first or last scorer. Check out this article about NFL touchdown scorer betting. 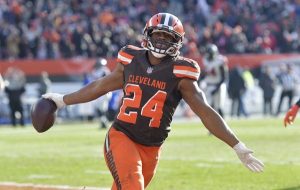 The forgotten man in the Cleveland offence, and I’m hoping that the other teams in the NFL have also forgotten about him. The talk surrounding Cleveland this summer has all been about their capture of Odell Beckham Jr and what both him and Jarvis Landry can bring to this team. They are expected to do the business and finally turn this team around, but there is another weapon the team has that continues to go under the radar.

Nick Chubb led their running backs last season with just under 1000 yard on the ground, to put that in perspective that is more than Alvin Kamara had on the ground, a player the entire league is going wild about. He scored eight touchdowns and added a further two through the air to give him 10 on the year. While that is not a huge amount, Chub uga is all about yards on the ground, and that is where you are going to make money backing him this season.

Anyone who can rush for 1000 yards in this league will get you something, and there is a chance that those numbers can increase for Nick Chub uga this year. With all the attention on what Beckham and Landry can do through the air, will opposing teams forget about the ground threat that Chubb brings? I certainly hope so. If that is the case then expect smaller coverage and more gaps for him to run into, this could be a golden opportunity for Nick Chubb to shine and show he is an elite back in this league.

As far as betting goes, Chubb isn’t one to rely on too much for touchdowns, but with 90% of his plays coming on the ground he is one to focus on when it comes to backing rushing yards. That is exactly where I expect to see Chubb succeed this season for his fans. 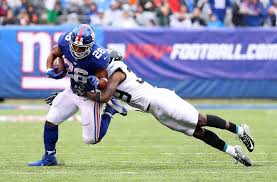 Could Saquon Barkley Penn State have found himself in a worse position last season? From being a star in college to being pushed into the limelight of the NFL, he was placed behind one of the worst offensive lines in the league on a team that was struggling to move up the field on a weekly basis. Things could not have been any tougher for Barkley in his first year in the league, and despite all of that he came out with some incredible stat lines. If the Giants can get themselves sorted this season they have a player here who can drive them forward.

This is only Barkley’s second season in the league, so I don’t expect him to fully break out just yet, but I am expecting more this time around. Having said that, how do you top over 2000 total yards and 15 touchdowns? That may be difficult! The signs point to the Giants being better on the line this year, which should help them protect Barkley a little better and with Eli Manning edging towards the end of his career, Barkley will no doubt see the ball a lot again this coming season.

The league will know to watch Barkley more this time around, so expect additional coverage in certain areas of the game and that will make it harder for him. However, with a stronger offensive line in front of him, there is every chance that they can protect him and allow him to keep moving the ball up the field at the rapid rate we have seen him do so far.

This may not be a year for Saquon Barkley PSU to beat his own personal stat line from last season, but with his offensive line there to help him out, he should be confident of replicating it and if he does then both rushing yards and receiving yards should provide plenty of betting opportunities for those following him.