All you need to know about Doom eSports

The history of Doom, one of the most influential Doom FPS franchises out there, and the history of competitive gaming are closely related. This once famed series slid into relative obscurity over the years, and so did the community of gamers who wanted to play it on a competitive level. However, 2006’s Doom came knocking and blew everyone away, and is still widely regarded as one of the best shooters of the decade.

Several years down the line, and we also have Doom: Eternal. This new entry is poised to be bigger than ever before – we are once again given the chance to wade through hordes of demons over blasting heavy metal riffs. However, there is another angle to this: eSports games are reaching heights we haven’t seen before, both in terms of game variety and popularity.

So, could Doom be the next big thing in eSports? Let’s consider a few things about Doom esports. If you decide to make a bet on esports, you need to know best esports sports betting sites in 2022.

A Brief History of Competitive Doom

We won’t spend too much time discussing how much this game influenced its genre – you’re probably well aware. However, it is also noted as one of the first video games ever to offer player-vs-player modes in any serious capacity. While the singleplayer campaign is a watershed moment in the history of gaming, it is also worth noting how much Doom’s ideas influenced everything we know about gaming.

Let’s give you an example: Doom is the game that first coined the term “Deathmatch”. If that doesn’t paint you a picture, nothing will. The game, along with Wolfenstein 3D, ushered in a new era of FPS games that worked quite differently than what we have today. These days, they are commonly referred to as “Twitch shooters”. 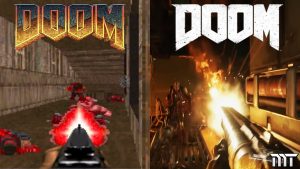 And no, this doesn’t have anything to do with the streaming platform. The name comes from mindbogglingly fast pace some of these games head. Unlike today’s fan favourites and biggest esports games such as CS:GO and Rainbow Six: Siege, these games weren’t about tactically clearing rooms, team coordination, and objectives. No, twitch shooters had players jumping around maps at breakneck speeds, trying to shoot each other with relatively slow-moving rockets.

Of course, this wasn’t entirely Doom’s design. The most popular entries in this mad sub-genre as series such as Quake and Unreal Tournament, which went on to dominate early FPS tournaments. The level of skill and reflexes required to play one of these at a high level is difficult to describe, so we suggest doing a little digging of your own. 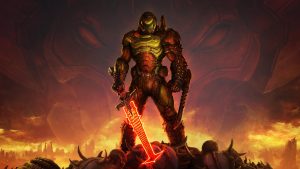 Why Doom could work with today’s eSports scene

Either way, twitch shooters died down after a while, and were replaced by modern military FPS games, such as the acclaimed Call of Duty Series. Skip forward a few decades, with various trends taking over competitive gaming as they came and went: CoD, MOBAs, and today’s Battle Royales. All of this led us to what we have today, where most shooters played as eSports are a sort of combination of these various schools of thought.

Let’s use Overwatch as an example. As most would agree, Blizzard’s smash hit combines elements of hero arena games (MOBAs, generally) and shooters. But not just any shooters – the prevailing ideas are straight out of games like Quake. Our point is this: there is an audience for this type of competitive play, even today.

I, for one, would welcome a return to the glory days of twitch shooters. There is massive entertainment value in high-level Doom matches – exciting, fast-paced, and with an enormous learning curve. This allows player skill to come to the foreground more than anything else, and esports fans love to watch on Doom twitch channelsthat sort of thing.

Which brings us back to 2016’s Doom. At this point, you might be thinking – so why didn’t Doom’s multiplayer take off like its predecessor? It sure had the potential, even though nobody knew at the time. Doom 2016 is a critically acclaimed masterpiece according to millions, but we are yet to see any sort of serious Doom tournament or competitive Doom event.

So let’s take the chance to remind you: Doom’ssingleplayer campaign is what’s critically acclaimed. The multiplayer modes, on the other hand, were in a sorry state at best. It’s one of the biggest points of criticism for the entire game. Missing features, connectivity issues, rampant cheating, limitations as to how it may be played… The list of faults goes on. It seems Doom 2016’s multiplayer scene was dead before it even got a proper chance to live.

Thankfully, id Software’s team has been listening. A much better multiplayer experience was promised, and now it is here. To everyone’s surprise, it was a wholly different one than usual Deathmatches and Capture the Flag modes. 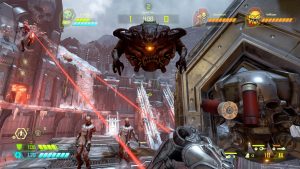 Deathmatch is completely out. Traditionalists might shudder at the thought, but look at it this way: there’s plenty of games out there that do Deathmatch. Some do it better, too, because Doom’s gameplay loop comes down to “aim, shoot, repeat.” There’s nothing innately wrong with that, but there’s just not a lot of depth – unless the game mode gives it some.

Enter “Battlemode.” This is Doom: Eternal’s sole multiplayer mode as of the writing of this review. The mode pits the titular Doomguy against two player-controlled demons and an army of smaller enemies. It plays off the campaign’s strengths: constant, high-octane action, blood, and gore.

On the other hand, the two demon players direct their minions. This side of things is all about being cunning rather than quick and jumpy: you have to wind the right chance to take down Doomguy himself.

How much this mode lends itself to competitive FPS play remains to be seen. The very fact that the teams are not balanced by design presents some issues for Doom Eternal eSports. However, stranger things have happened in the world of eSports, and this hill might just be the next one Doom climbs.