History of Football in Liechtenstein

As early as the 1930s, young men in the country played football. With limited resources and little infrastructure available in Liechtenstein, they simply found appropriate areas and organised matches. Also, winter sports date back to the early 1930s, and the country even competed in the Winter Olympics in 1936.

This was followed by the establishment of a wide range of clubs, with supporters of modern sports also forming clubs in recent years. At the moment, there are several football clubs in Liechtenstein, but the country does not have its own league. Football clubs in this country compete in the Swiss football leagues, with Vaduz Football Club currently playing in the second-highest division.

Aside from the Swiss Football Association, football clubs in Liechtenstein were affiliates of the St. Gallen Cantonal Football Association from 1934 to 1937. During this period, there was a tournament for clubs from Liechtenstein only that determined the country’s champion. Since 1945, the country has had its own cup tournaments, and the winner is guaranteed to compete in the Europa League qualifications. 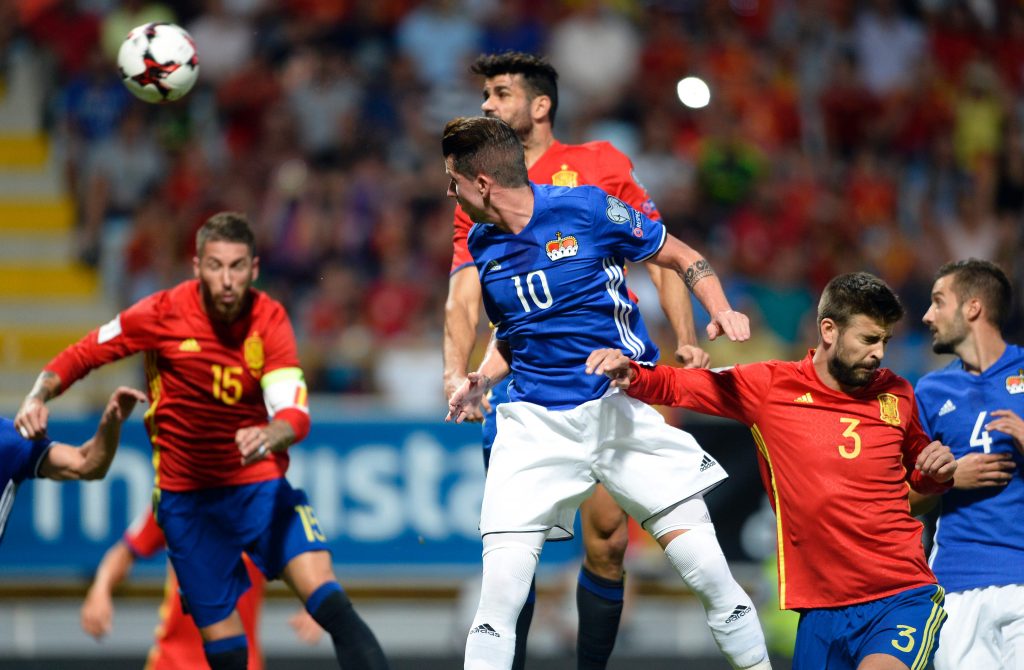 FC Vaduz has become the dominant force in the Liechtenstein Football Cup, where it has won fifteen of the last 16 competitions. Up to this moment, Mario Frick, who is the manager of Vaduz Football Club, holds the record for the most goals scored and appearances for Liechtenstein. Also, he has played in different football leagues across Europe.

Due to the lack of a national association football league in Liechtenstein, the clubs in this country cannot participate in the UEFA Champions League. However, it is still possible, but only in one way. The team must win the UEFA Europa League.

Liechtenstein has only seven football clubs, all of which have already build a strong reputation in the Swiss league tournaments. The national cup competition in Liechtenstein is the only route that clubs in the country can use to participate in any European club competitions.

The Liechtenstein football cup competition has an unusual format. Not only can the first teams of the seven football clubs take part in the tournament, but also the reserve sides that compete in the lower divisions of the Swiss national league. This can result in unusual scenarios, where a team in the first seven can be knocked out by a club from the lower divisions. This was the case in the 2006/07 cup competitions, where a second division team went through.

Additionally, in this tournament, teams from the same club can be drawn together in any round, and this happened in the 2009/10 competition semi-final stage. Football teams are seeded based on their respective performances in the previous year. The seeding determines the round that a given team will start the tournament in.

When it comes to records, in the Liechtenstein Football Cup competitions, FC Vaduz has reached the finals 60 times, winning 47 of them. This means that it is one of the top football clubs in Liechtenstein. So let’s learn more about this fantastic football team.

The History of FC Vaduz

FC Vaduz is one of the best football clubs in Liechtenstein. The team competes in the Swiss Football League, and its home ground is Rheinpark Stadion Vaduz, which currently has a capacity of 5,873 plus additional standing places in the south and north ends. Football Club Vaduz was established on 14th February in 1932, and Johann Walser was the club’s first chairman. 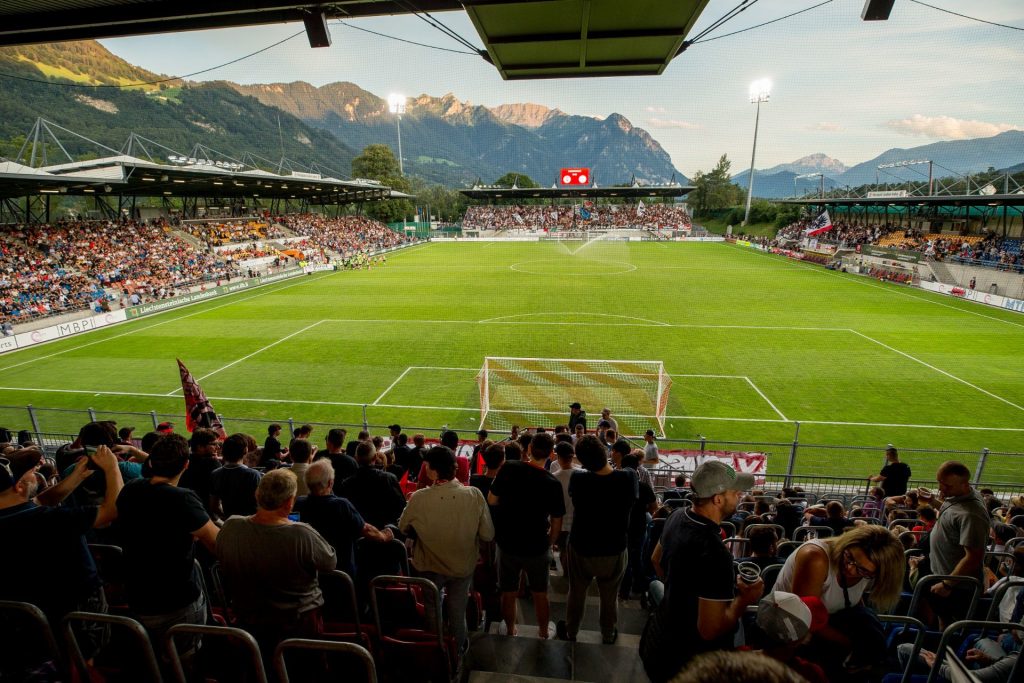 However, the team was relegated to the Swiss Challenge League after one season. Finally, it returned to the Swiss Super League after five years. In 2010, USV Eschen/Mauren and Football Club Vaduz decided on a better deal, especially on the development and exchange possibilities of players of the two teams.

In 1992, FC Vaduz qualified for European club football for the first time, competing in the UEFA Cup Winners’ Cup but lost in the qualifying round to Chornomorets Odesa, one of the best teams in Ukraine. And in 1996, Football Club Vaduz qualified for the first round of the UEFA Cup Winners’ Cup on penalties against Universitate Riga from Latvia. However, it still lost to Paris Saint Germain of France. 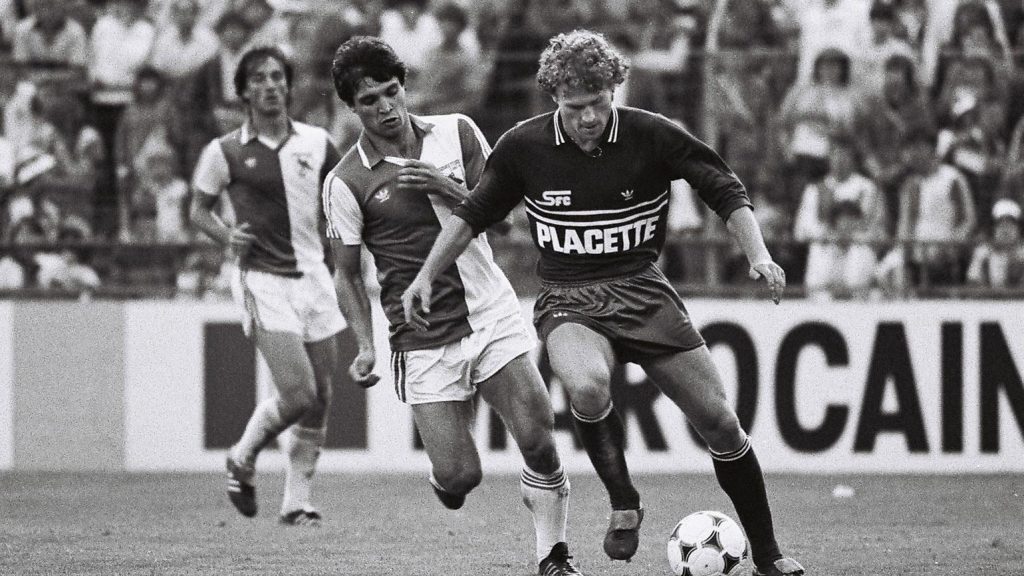 After the UEFA Cup Winners’ Cup tournament was abolished, FC Vaduz has qualified for the UEFA Cup, famously known as the UEFA Europa League each year. However, up to this moment, Football Club Vaduz has never got past the qualifying rounds. For the 2005/06 season, Mats Gren was the manager, and in the first round of the UEFA Europa League qualifying, Football Club Vaduz defeated FC Dacia Chisinau from Moldova. But it was eliminated in the second round by Besiktas.

In the 2009/10 season, FC Vaduz started its European campaign by beating Falkirk FC from Scotland in the second qualifying round. But it lost to Slovan Liberec FC from Czech in the qualifying round. In the 2014/15 season, FC Vaduz survived relegation for the first time. It finished the season in the 9th place with only 31 points. However, Football Club Vaduz also won its 43rd Liechtenstein Football Cup, becoming the world record holders of a domestic title in the process. 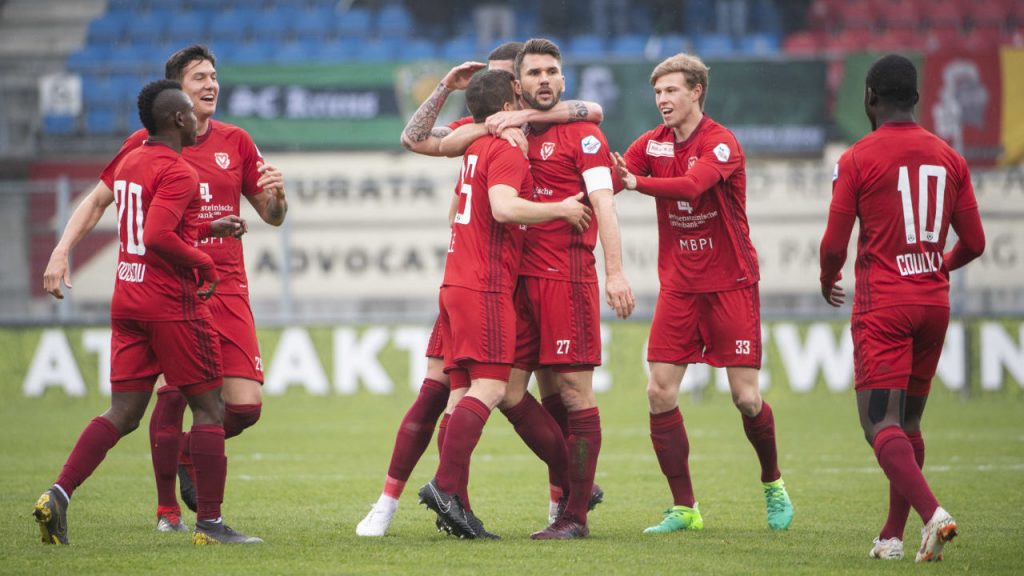 In the 2015/16 season, FC Vaduz won its 44th domestic cup and finished the season with a team record of 36 points. The club was also the first team from Liechtenstein to appear in FIFA 17, one of the popular sports video games in the world.

After three years in the Swiss Super League, the only and most celebrated team from Liechtenstein was relegated. The 2016/17 season was not good for the team, and its management even changed its most serving coach, after approximately five years at the helm. Roland Vrabec, a Germany coach, replaced Giorgio Contini. Despite all the changes, Football Club Vaduz hasn’t managed to play in the Swiss Super League.

On 5th September 2018, the team terminated its agreement with Roland Vrabec, and on 17th September the same year, it presented Mario Frick as its new coach. He is the first club manager from Liechtenstein in history. 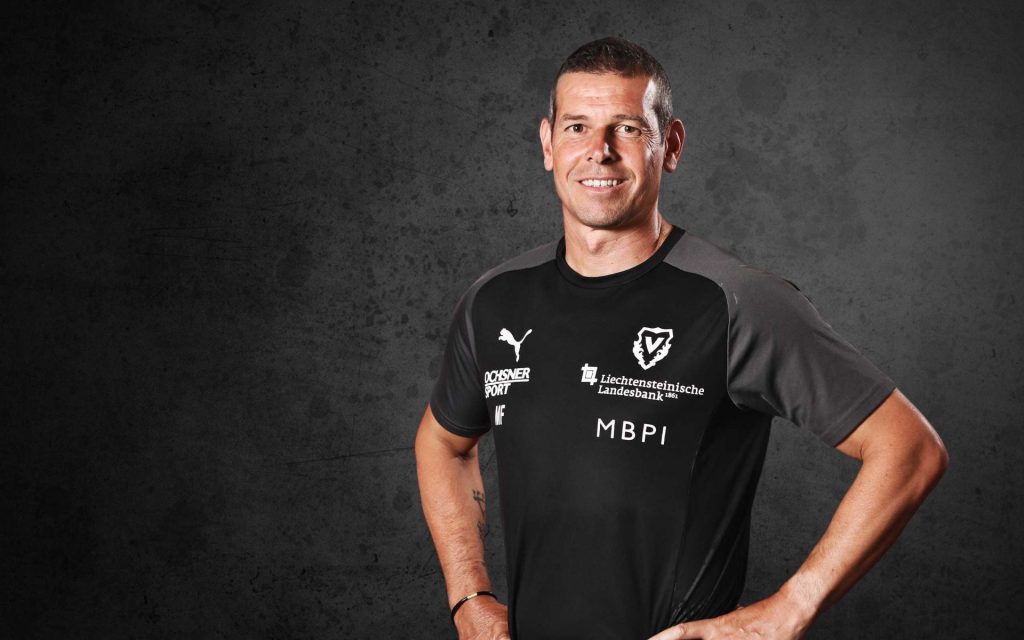 Mario Frick has managed to build a strong team, and in the 2019/20 season, FC Vaduz started the campaign in the UEFA Europa League by thrashing Breioablik from Iceland and beating Mol Fehervar, a Hungarian team in the first and second qualifying rounds consecutively. However, it lost to Eintracht Frankfurt from Germany in the third qualifying round.

Mario Frick was born on 7th September 1974, in Liechtenstein. He is a retired professional footballer, and currently, he is the manager of Football Club Vaduz. He has scored a national record of sixteen goals for his country and earned 125 caps from his debut in 1993 until retirement in 2015. Mario Frick was a striker, but he was also deployed as a centre-back on some occasions.

Frick started his club career with the FC Balzers youth team in Liechtenstein. He played four seasons for the senior team in the 1990s. In 1994, he played abroad, signing with St. Gallen Football Club. By playing abroad, Mario Frick was the first professional footballer in the history of Liechtenstein. After some spells in the Swiss Super League with FC Zurich and FC Basel, Mario Frick started attracting scouts from some of the top teams in the world.

In the 2000/01 season, he joined Arezzo, an Italian team where he scored an impressive sixteen goals in 23 appearances. After having a successful season with Arezzo FC, he signed a contract with Hellas Verona, another Italian football club. Once Hellas Verona FC failed to keep its top-flight status after three years in Serie A, Mario Frick signed with Ternana, a team in Serie B in 2002.

On 8th January 2006, he extended his contract with the Ternana club until 2009. With Ternana, Mario Frick managed to play 133 games and scored 44 goals. Both the goals and games were personal records for Mario Frick at a single football club. In July 2006, Mario Frick moved to AC Siena, where he wore the number 7, playing in the Serie A for the second time. At the expiry of his contract, he left Siena in May 2009.

And in June 2009, St. Gallen Football Club signed him for one year until 2010. Following Mario’s spell with St. Gallen Football Club, he signed with the Grasshoppers in January 2011. Mario Frick decided to end his professional football career in July 2011, returning to his first club, FC Balzers. He retired as a football player in the 2015/15 season at the age of 41 years. 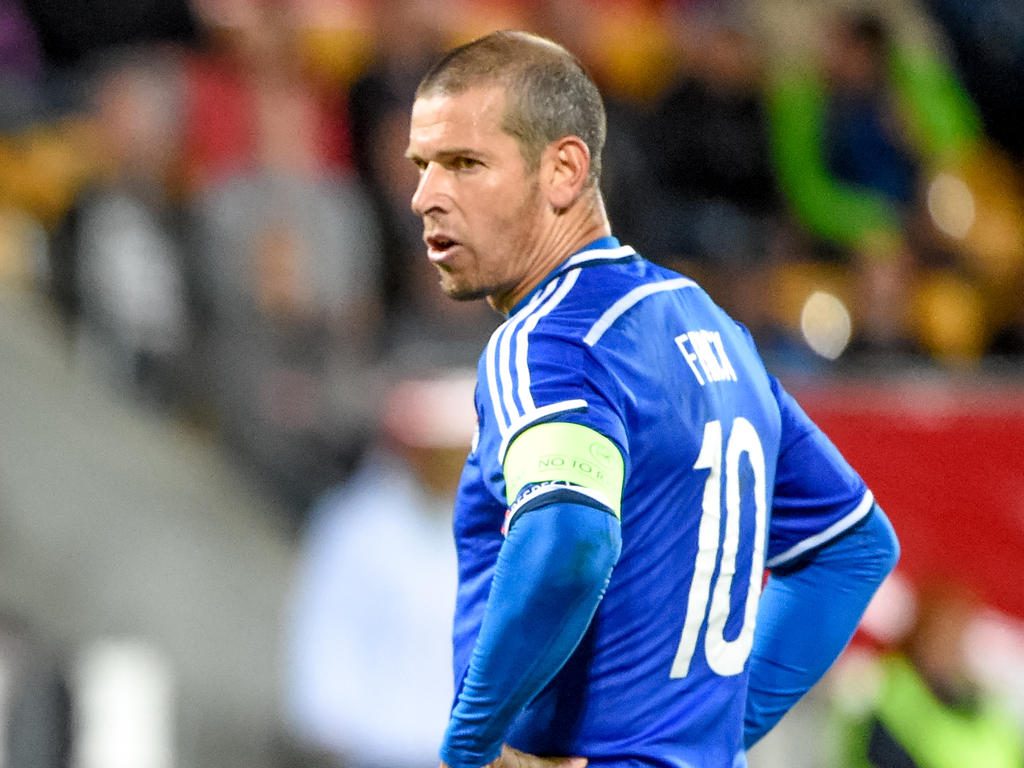 Mario Frick first played for Liechtenstein in October 1993 against Estonia in a friendly match. He managed to establish himself immediately as a vital player for the Liechtenstein football team. Frick scored his first goal in a FIFA World Cup qualification game in 1998 against Romania.

During the Euro qualifier in 2008 against Latvia, he scored the only goal of the match, which provided Liechtenstein with the first win over a team that has qualified for major tournaments. On 10th August 2011, Mario made a record 100th match appearance for his national team. 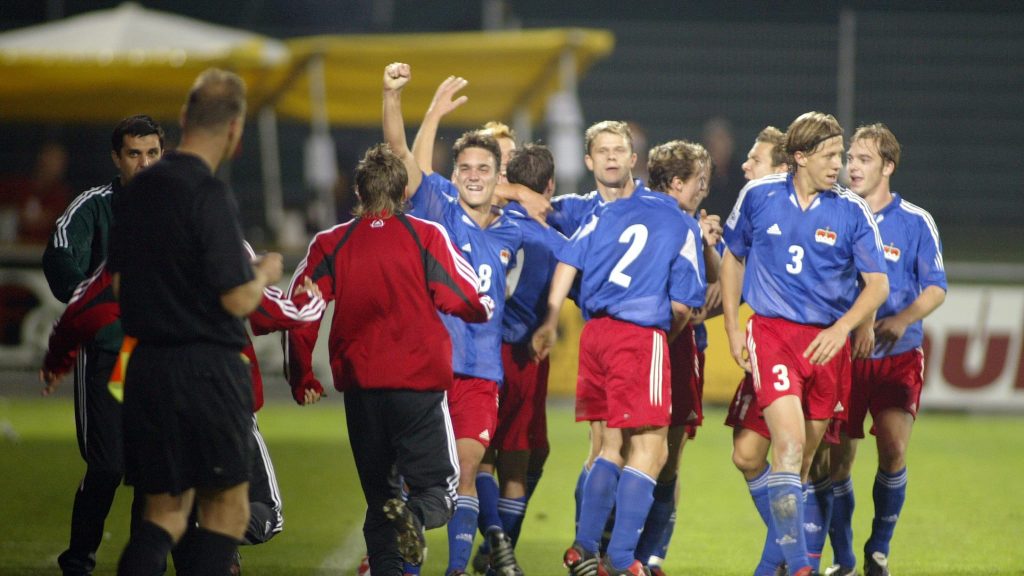 As a coach, Mario Frick has managed to guide the club back to the Swiss Super League, following a second-place finish in the Swiss Challenge League in the 2019/20 season, and a victory over Thun Football Club in the play-offs. Mario Frick has already shown his managerial skills, and football fans not only in Liechtenstein but also across the world are looking forward to more trophies and plenty of successful seasons.