Slovenia didn’t win easily against the Belgians, it was a hard fought battle for 3 quarters, but the Slovenians concentrated and played well in the last quarter to win 88:72.

In this game I prefer Slovenia -14, because I think the team has learnt from the last round, maybe the pressure of the playoffs was a little bit. However, in this game against the Poles I think the Slovenians will be focused from the first minutes. 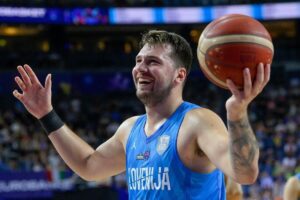 Poland beat Ukraine in the eight-final round and defeated the Netherlands and Israel in the group stage, but these teams are playing rather slow and less attacking basketball than Slovenia, which is showing a special offensive style, scoring an average of 92 points.

It will be very difficult for Poland to stand up to this kind of offence, as already shown in this Eurobasket 2022, when the Poles lost by large margins against the Serbians (-27) and the Finns (-30), who are good offensively.

The only nuance is that teams are not motivated to achieve such advantages as -14, the most important thing for them at this stage is victory. But Slovenia has an impressive offense and has already shown against the Belgians that if they concentrate, they can cover such an advantage in a game, so it shouldn’t be difficult to achieve that in all the games.

This Eurobasket 2022 prediction is for guidance only and we are not responsible for your bets.